Home/Digital Photography Concepts, Lightroom 3-6, CC 2015, Classic Tutorials, Organizing and Managing Photos (Library)/Shooting in Raw + JPEG Mode: Why Most of Us Shouldn’t, And How to Set Lightroom Preferences If You Do
Previous Next

Shooting in Raw + JPEG Mode: Why Most of Us Shouldn’t, And How to Set Lightroom Preferences If You Do

More and more photographers are aware these days that raw files provide higher quality information and more flexibility in processing than JPEGs do. For those of you convinced to shoot raw files, your camera most likely gives you a choice to save just a raw file, or to save both a raw file and a JPEG of each photo you capture.   Frankly, I hope to convince most of you who capture raw + JPEG to stop doing it and capture just a raw file. However, for those who choose to capture both, I will explain the file management options available to you.

When I first started shooting in raw, I chose raw + JPEG because I wasn’t yet comfortable with raw files, and I wanted some insurance that I could revert to using the JPEGs. Not only did this mean that I had twice as many files to manage, which took up a lot more hard drive space, but it was frustrating as well. I would often accidentally work on the JPEG instead of the raw file, and then have to redo my work on the raw file. I I also found it extremely frustrating that the raw file didn’t look like the JPEG, and I could never get it to look like the JPEG.   As soon as I took the plunge into raw only, all of these issues melted away — less hard drive space, no confusion, and no jpeg for comparison, so I simply worked the raw file to my taste.  And this is in fact what I would encourage most of you to do.

You will be OK Shooting Raw Only!

For those of you new to capturing raw files, here’s why I think you can safely give up capturing those JPEGs as well:

1. The workflow in Lightroom is exactly the same for raw files as it is for JPEGs — so there is nothing new to learn!

2. You can create a JPEG from your raw file (to email out or post on the web, for example) anytime you want, very quickly, using Lightroom’s Export functionality.

3. If there is something about the colors of your JPEGs that you really like and want to apply to your raw files, you can use camera profiles to start out  closer to the look of your jpeg. (You will probably still need to add more saturation and contrast.)

4. If you are on a PC and can’t preview your raw files in Windows Explorer/My Computer and want to be able to, just like you can your JPEGS, you can install a plug-in from Microsoft that will allow you to do so (at this link, check to see if your particular camera file type is supported).

All that said, I certainly have heard valid arguments for capturing both.  For example, the JPEG can be sent off to someone without any processing at all — meaning without having to import it into Lightroom, potentially work it, and then export a JPEG copy. So for those of you who need to get a draft version of your files out to someone immediately after capture, this can certainly make sense. Another example would be if you like your camera’s black and white conversion – this does not get applied to raw files, only JPEGs. Shooting raw+JPEG can give you both the flexibility of the raw color version and the black and white JPEG version.

If you choose to do this, you will need to make a decision on how Lightroom is to handle these two copies of your photos.  You have two choices: to treat the JPEG and raw files as separate photos or not. This is specified on the General tab in Preferences (Lightroom>Preferences on a Mac, Edit>Preferences on a PC). 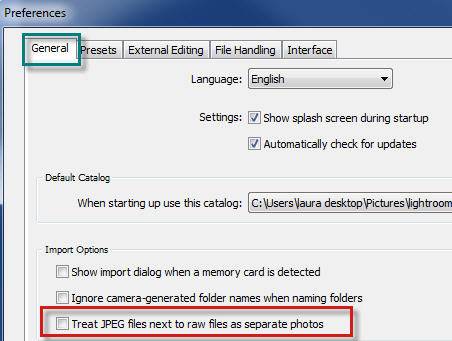 Ultimately I can’t make a recommendation to you on which option to use, as it will depend on why you are creating the JPEGs, but here is how the two options work:

1. Box checked: JPEG files next to raw files ARE treated as separate photos

This means that when you import your shoot, you will see both the raw files and jpegs in the Import dialog, and unless you uncheck one or the other in the Import dialog, both the raw file and the JPEG will be copied to your hard drive and  imported into Lightroom, just as if they were two separate photos. You can store them in the same folder, or move them to separate folders; deleting one will not delete the other  — they are independent.

2. Box NOT checked: JPEG files next to raw files NOT treated as separate photos

This option allows you to create and send off those camera-generated JPEGs, without having to deal with the confusion of having both copies in Lightroom. In the Grid in the Library module, if you are displaying the file extension, it will display as your raw file type +JPEG to let you know that you also have a JPEG out on your hard drive. 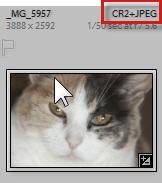 A Note on Working on Your Photos

Note that in neither case will your work on the raw file or on the JPEG (rating, flagging, keywording, developing, etc) transfer to the other. Particularly in the case of Develop work, I would argue that you would not want it to — your raw file and JPEG will look different out of the camera — the same Develop decisions will often not be appropriate. If you have imported both the raw file and JPEG and want to work on them together, you can use Sync or Auto Sync to do so

For those who choose to shoot raw+JPEG, and import both into Lightroom, in the follow-up post below I discuss a couple organizational options and tools available to you.

I would be interested in hearing from you — all this said, do you still plan to shoot raw+JPEG, and if so, what are your reasons?

Thank you to Andre G. for this blog post idea.