Home/Editing Photos (Develop), Lightroom 3-6, CC 2015, Classic Tutorials, Troubleshooting/What is that Exclamation Mark Below My Photo in Lightroom 4? If, When, and How to Upgrade to the New Process Version
Previous Next

What is that Exclamation Mark Below My Photo in Lightroom 4? If, When, and How to Upgrade to the New Process Version

If you have upgraded to Lightroom 4, when you look at photos in the Develop module that you had in a  previous version of Lightroom, you will see an exclamation point in the bottom right: 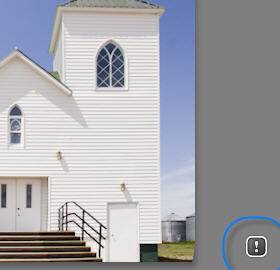 This is a signal to you that the photo is continuing to use your settings from the old (pre-Lightroom 4) processing technology. The photo therefore should look the same to you as it did as you had left it in the earlier version of Lightroom (worked or unworked), and you will have the same Develop controls as before (for example, Recovery and Fill Light in the Basic panel, instead of Highlights, Shadows, Whites and Blacks.)

Forgive me for the length of this post, but before I explain how to update, I need to first explain IF and WHEN I think it is appropriate to update.

If you are done fixing and enhancing a photo, or you want to continue to use the Lightroom 3 controls to finish working on it, then there is no need to update the Process Version — simply ignore the exclamation point. However, you should know that the Lightroom 4 controls are more powerful — for example, you can recover more detail in highlights, and avoid some of the halo issues that Fill Light, Recovery and the old version of Clarity used to have.

When you do update the Process Version, Lightroom does its best to translate what you did with the Lightroom 3 sliders into the appropriate settings for the Lightroom 4 sliders, so that there is as little change to your photo as possible.  However, the math behind the sliders is so different, that often Lightroom simply cannot match the appearance before and after.  While some photos won’t change much, others will change very significantly — it depends on how extensive your Lightroom 3 work was.

Below are two examples. In this first one, I had done very modest Exposure, Contrast and Clarity adjustments in Lightroom 3. The translation from old to new Process Version is just about perfect — I see little if any difference.

Photo with only modest enhancements in Lightroom 3: Before and After Process Version Update

In this second example, I did very heavy adjustments in Lightroom 3: + 100 on Recovery, +100 on Fill Light, and significant Exposure, Brightness and Contrast as well. The update to the new Process Version, i.e. the translation from old to new isn’t bad, but it nevertheless significantly darkened my photo: 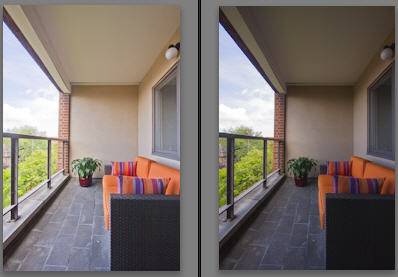 Photo Heavily Worked in Lightroom 3: Before and After Process Version Update

Does this mean that the new Process Version, i.e. the new Lightroom 4 technology and sliders, are bad, and you should never update?  Definitely not. The Lightroom 4 controls are more powerful and have fewer unintended side effects.  In the second photo above, after updating the process version and then working it with the Lightroom 4 controls,  I was able to get more detail in the clouds, more light into the shadows, and avoid odd halos along the tree line caused by using so much Lightroom 3 Recovery. Here is the photo zoomed in on the sky: 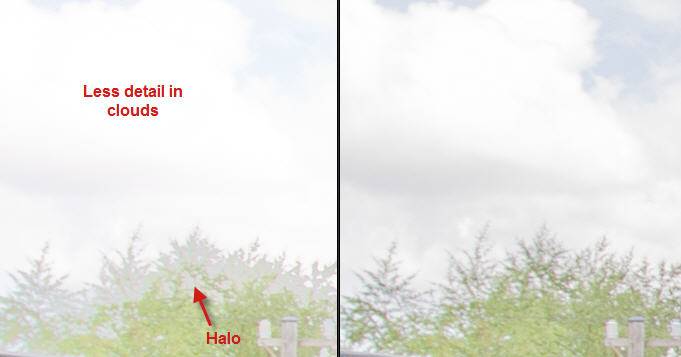 What it does mean is that because updating to the new Process Version may significantly change my photo, I am only going to update photos if and when I am willing and ready to rework them.

To update, in the Develop module, simply click on the Exclamation Point to the bottom right of your photo.

You will get the following dialog box:

Because of the issues I have discussed, I highly recommend that you do not choose to update all your photos at once — Update All Filmstrip Photos would in fact update all photos you see in your filmstrip at once.  Instead, Update will just update the one photo selected.

Review Changes via Before/After will show you the old Process Version right next to the new one.  If you choose this option, after you click on Update and review the change, type the shortcut Y to get out of Before/After mode.

If you just updated and want to revert back to Process Version 2010, in the History panel click back to the step before Update Process Version (Temperature in my example below), or use the shortcut type Ctl/Cmd-Z, to undo this last step. 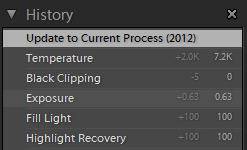 At any time you can change Process Versions in the Camera Calibration panel:

Finally, just remember that until you update to the current Process Version, you will not have access to the new Basic Panel, adjustment brush and graduated filter controls, or the individual Red, Green and Blue channels in the Tone Curve panel point curve.  I have gotten many emails from folks asking me why their version of Lightroom 4 doesn’t have the new controls — now you know!